Yesterday was one of the big days of the football calendar – the Champions League final; almost a holiday for me, a day I look forward to every year, just like I’m looking forward to the upcoming World Cup. Yes, I’m a big football fan – my Dad played football when he was young, and when I was a kid there was always a football match on the telly. Football (like all team sports, from rugby to cricket, from baseball to ice hockey) isn’t just a game, it’s an event, a celebration – and it unites people!

So my parents and I decided that we’d get together for the match and watch it on German satellite TV here in Piraeus, Greece – in style, with all the necessary ingredients: pizza, chips, chicken wings and beer! We met early in the evening, ordered our food, had a lovely chat, and then watched the pre-game show (my 17-year old daughter was with us, too, and enjoyed the evening, particularly the pizza; but, elusive as usual, she didn’t want to have her photo taken). 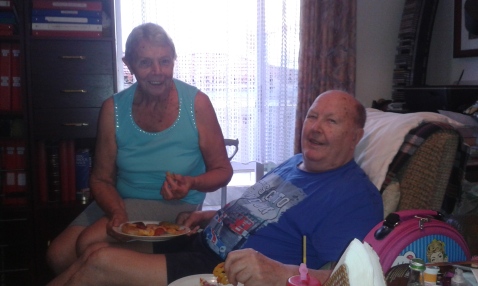 And then for the great match… And this year was particularly exciting for me – Liverpool FC, mine and my sweetheart’s favourite team, were in the final again after 13 years! Unfortunately, Ian is in London at the moment, 1,500 miles away – but we’d exchange text messages all evening on the development of the match, of course. Love knows no boundaries and no distance – and it’s a lovely thing to support the same team! 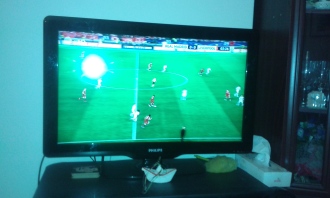 Well, as most of you probably know, things didn’t go quite so well for Liverpool; we lost 3-1, and Real Madrid are now European Champions for the third time in a row. Why? Well, because right now they ARE the best team in Europe. Of course we all want our team to win – but it’s no use being unfair; you’ve got to respect the opponent, and you’ve got to admit defeat. I’ve been to Spain many times, I speak a bit of Spanish, and I love the Spanish – and they’ve certainly got a couple of darned good football teams!

And that’s exactly what makes football so special: it’s the most popular game in the world, and it unites – it unites people, and it unites peoples as well. There is usually a much friendlier atmosphere when two teams from different countries play against each other; it’s a well-known fact that people love bashing each other’s heads in when it’s against someone from the same country or even the same city… It’s getting together with different people, different cultures, that makes us learn new things – most of all, to respect each other. 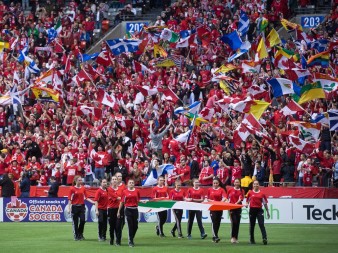 Back to the football party: a football match on TV is an ideal opportunity to invite family and friends – order that pizza, prepare those beer cans, and switch on the TV; a great evening is guaranteed! Or, if you can’t get the game on your TV set, meet your friends in the pub and watch it there; the atmosphere is unique, I can assure you. 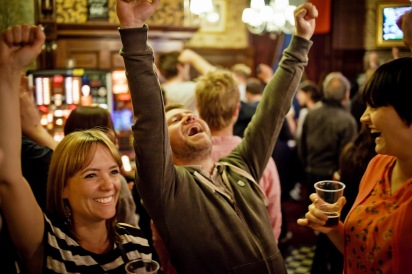 It doesn’t really matter THAT much if your team loses, either; it’s the fun that counts, and the sport. Don’t begrudge the winners their victory – chances are that they were simply better. And many times, there even is someone in the opposite team we actually feel happy for in the end; there certainly was for me last night. Gareth Bale, the Welsh boy made good, a wonderful lad and undoubtedly the best player in Europe these days, scored two magnificent goals which ultimately brought Real Madrid the victory. So here’s to the winners – congratulations, Real, congratulations, Gareth!

One thought on “Get together for a football party!”