One of the best ways to get through lockdown, to make the time pass and to cheer up, is watching a good movie; and these days it had better be something entertaining, cheerful, positive and uplifting. I’ve often checked on YouTube for favourite movies of mine before deciding on buying a DVD, because on that great video site of endless entertainment they’re free to watch, of course – if you’re lucky enough to find them.

Often, a movie or music video gets deleted because of copyright problems; then maybe, some time later, someone else uploads it again – so it’s a bit of a come and go. But there also are a lot of movies that are public domain because the copyright has run out, so it’s perfectly legal to upload those!

Still, it’s extremely difficult to find any recent movies of any value on YouTube for free, so the ‘newest’ one in my selection here is from 1986 – but just try one or two of those older gems, and you’ll see that they’re just as good, if not better, than the most recent cinema releases! Me, I’ve always had a foible for old movies; my darling husband Ian and me actually ‘met’ on the film site IMDb, discussing Mae West and Marjorie Beebe…

Just give those great little old movies a try – we’ve all got more than enough time to kill at the moment, anyway, haven’t we – and maybe you’ll soon be adding some new names to your favourite films and actors lists… And another tip: for an even better movie atmosphere you can connect your laptop to your TV set via an HDMI lead (the one that’s probably linking your DVD player to your TV set right now) and watch the movies on your TV screen! 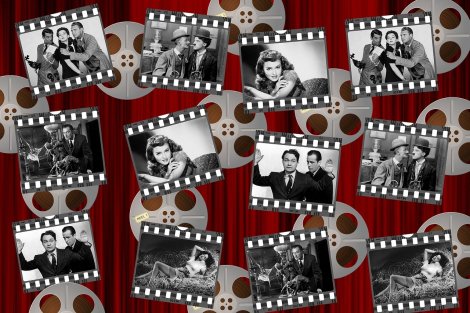 So, here’s my selection, in chronological order:

And why not a silent movie? Have you ever watched one? Have you ever seen Harold Lloyd climb a skyscraper and in the process hang from the arm of a huge clock? If you haven’t, this will be a whole new film experience for you (and even more so for your kids, if you have any and are desperately trying to find some unusual entertainment for them!) – a hilarious classic silent comedy with lots of thrills and spills!

This film coined a whole subgenre of thrillers: the old dark house mystery. Wonderfully old-fashioned and stylish, it takes us to a mysterious old mansion during a storm, where stars like Charles Laughton, Raymond Massey and Boris Karloff gather to unravel a deadly secret… Young Lillian Bond is simply adorable in the female lead!

Another mystery set in a lonely house – based on a play by none other than Agatha Christie, the Queen of Crime. Ten people have been invited to an old mansion on an island, only to be accused of murder one by one – and then they start getting murdered themselves one by one… A formidable cast (Walter Huston, Barry Fitzgerald, Judith Anderson, Louis Hayward) guarantees a lot more laughs than you’d expect from a plot like this!

Unbelievable as it seems, but you can actually watch a HITCHCOCK for free on YouTube! And this is one of his best, both thrilling and beautiful, with a lovely touch of romance. Ingrid Bergman and Gregory Peck deliver fantastic performances in this Hollywood classic, so don’t miss it!

More Hollywood glamour, but this time the action variety: a colourful adventure romp set in old New Orleans, starring Yvonne de Carlo as a saloon girl and Rock Hudson as a sea captain – definitely one of the most beautiful couples the screen has ever seen!

If you like it a bit more dramatic, this one’s just right for you: the saga of a Texas oil baron and his highly dysfunctional family with their various love affairs (Rock Hudson again, alongside Dorothy Malone and Lauren Bacall). Does that remind you of anything? Exactly – many critics claim that the enormously popular 1980s soap opera “Dallas” was inspired by this film…

This is a wonderfully hilarious British comedy for the whole family, starring the one and only Margaret Rutherford alongside other comedy stars of the time like Terry-Thomas, Bernard Cribbins and Ron Moody. Set in the fictional duchy of Grand Fenwick, this crazy story mixes up political intrigues and the race for the moon, and it’ll have you rolling on the floor with laughter!

Remember Bud Spencer and Terence Hill? The hilarious Italian duo that became world famous in the 1970s with their spaghetti Western spoofs – no matter whether you’re a Western fan or not, you’ll love their take on Leone and Eastwood! This is an English version of their great hit “Lo chiamavano Trinità” – a rare chance for non-Italian speakers to enjoy the work of Spencer & Hill without having problems understanding…

Another great spoof from the 1970s, on vampire movies this time; George Hamilton delivers a marvellous performance as a 20th century Count Dracula who is expelled from his castle in Romania and travels to New York in his coffin, where he meets not only a beautiful girl whom he believes to be his old love Mina Harker, but also her psychiatrist who is a descendant of Professor van Helsing… Lots of laughs guaranteed!

Jim Jarmusch is considered one of the best and most influential directors of modern-day Hollywood, and this is one of his early masterpieces. Three young fellows, two Americans and an Italian, are put in a prison cell in New Orleans together; they’re all innocent, but the claustrophobic atmosphere of their cell makes it difficult for them to get on. Nevertheless, they manage to break out together, and a run through the swamp begins that further tests their relationship… An unexpectedly charming tale with wonderful performances by Tom Waits, John Lurie and Roberto Benigni!

So, just pick a movie or two and enjoy your cinema afternoon, dear friends; meanwhile, I’ll keep searching YouTube for more uplifting and entertaining films to share with you soon!