This is the time, dear friends, for either doing new things or for rediscovering old passions; and after a busy day of cooking, baking and drawing, instead of spending the whole evening in front of the TV set, why not look into a book sometimes? As I’ve told you, I’ve always been interested in everything Celtic (having been born in Bavaria, I’m at least part Celtic myself); and I’m just rediscovering my bits of knowledge of the history and culture of the Celts on the British Isles, and adding to them with the help of a few books and, of course, that neverending source of information, the internet.

As you know, my darling Ian and me share our home with our three little Celtic friends, each one from a different part of the Celtic Nations – one Brythonic one, little Ben from Wales, and two Gaelic ones, Lep from Ireland and Nessie from Scotland. And so, I’d like to share various obscure and thrilling stories from the history of those three countries with you, dear friends; let’s start with Wales.

Wales has got a very rich treasure of myths and legends; after all, it’s the home of Britain’s greatest hero, king Arthur! It’s also got a long tradition of Celtic poets, called bards, and quite some of their works have survived even though they’re more than 1,500 years old! The most famous Welsh bards were Taliesin, Aneurin and Talhaearn; so today I’ll tell you some things about Taliesin’s life and works.

According to legend, Taliesin grew up in Ceredigion in West Wales, where he first became a bard at the court of king Elffin ap Gwyddno; his job was to amuse the king and to satirise his enemies, namely Maelgwn of Gwynedd – this must have been in the 540s. He then went on to become the bard of Cynan Garwyn of Powys, east of Ceredigion and more powerful, and his fame seems to have spread all throughout the Brythonic kingdoms of Britain.

In his poems which he sang during festivities at the court, Taliesin did exactly what the ruler wanted from him: he massaged his ego, and he did it with great finesse and style. Cynan must have loved hearing this over and over again!

No wonder that he soon became sought for as a court bard: he moved up to the Hen Ogledd, the Old North which is now part Cumbria and part Scotland, and became the bard of the famous king Urien of Rheged. He sang great hymns of praise for him as well, of course:

With great ferocity and passion, Taliesin tells us about heroes and battles; even though they’re 1,500 years old, his words sound timeless:

Light, a robe of heat; vapour of heat, heat of vapour.
Whilst it rose it was contained without disgrace.
A sword will destroy the swordsman’s horse. 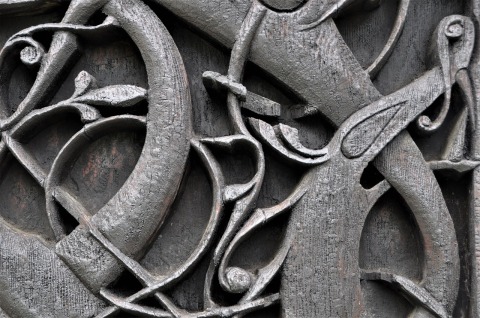 We owe a great lot to Taliesin: his surviving works are some of the oldest ever composed in a very early form of Welsh, and they confirm historical events such as the battle of Arfderydd, and even give us insight into life at the courts of the Celtic kingdoms of the time. You can read most of his poems online:

An even better way of getting to know the great bard better, though, is this book, which besides the original Welsh versions of the poems has also got a detailed section on the life and times of Taliesin and ancient British poetry in general:

Let the great Celtic bard take you to faraway places and times, dear friends; we can all do with some escaping these days, and if we can’t do it physically, we can at least do it with the help of our imagination!