Here’s another story from Celtic Britain, dear friends – from the very place my darling Ian and me are going to move to as soon as this pandemic is over: Anglesey. This beautiful island in the Irish Sea has got a very long history – you literally tread on it with almost every step you take. During our holiday there two years ago, we visited some of the oldest monuments on the British Isles, like the fascinating burial mound of Bryn Celli Ddu, which is about 5,000 years old!

But what Anglesey has been most associated with ever since the Celts came to the island (which back then might actually have been connected to the mainland) around 200BCE are – the druids! Anglesey, or Ynys Môn in Welsh, used to be a holy island, where sacrifices would be made to the gods by the druid priests. As we know, the Celts didn’t build the ancient standing stones or the burial chambers, but the druids certainly used them for their ceremonies!

When the Romans started occupying Britain in the first century CE, Ynys Môn became the last stronghold of the druids and the ancient Celtic religion; people from all over Wales found refuge there from the invaders, because it was by then separated from the mainland by the Menai Strait and therefore difficult to conquer. 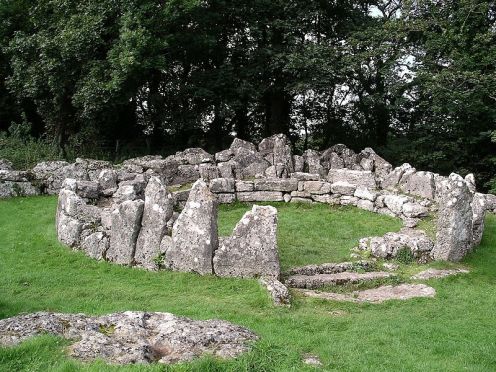 In 60CE, though, a great battle took place between the Roman occupation army under Suetonius Paulinus and the warriors of Anglesey, during which the Roman soldiers destroyed many of the druids’ shrines. In 78, Ynys Môn finally became part of Roman Britain when Agricola’s troops stormed the island again, killing most of the population; but the history of the druids didn’t stop there. Anyway, the Romans were forced to give up Anglesey when their British colony started falling apart in the 4th century – but new invaders soon appeared on the famous old island: the Irish!

Around 400, the beleaguered Welsh asked their cousins in the North for help, and Cunedda from Manaw Gododdin in what is now Scotland came with his army to drive out the intruders. He and his sons and grandsons succeeded in this task, and by 470 the Irish had left Anglesey. The new kings of Gwynedd, Cunedda’s heirs, even transferred their royal seat to Aberffraw on Anglesey because the island had such a strategically perfect position!

What also happened during that period, though, is that Christianity came to Britain, and both the Celtic rulers and their subjects soon converted in large numbers to the new religion – relinquishing the old druid traditions. On the other hand, another great Welsh tradition, the Eisteddfod, started at the royal court; a yearly poetry and music competition to find the most talented artists in Wales, which is kept up until this day! 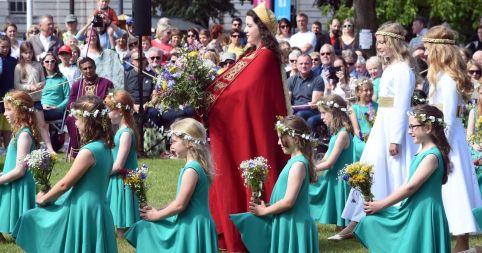 Despite Viking invasions (they gave the island its new name, Anglesey), Ynys Môn managed to keep its independence until the late 13th century, when the infamous Edward I ‘Longshanks’ invaded and subdued Wales and started building his massive castles. He had the palace of Aberffraw literally taken apart and with the building material he had Beaumaris Castle built on the other side of Anglesey, closer to the Menai Strait and the mainland.

The Welsh never gave up on their ancient culture and language, though, even through centuries of English oppression – they were forbidden to speak their own language, and yet it survived and with it all the old myths and teachings. And so, today the druid tradition on Anglesey is very much alive: in 1999, the Anglesey Druid Order was founded in order to restore and teach the old rites!